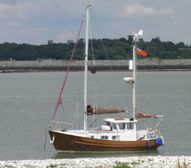 Pionier 9 fin keel sailing yacht from the design board of E.G. Van de Stadt.
Heavily built in GRP in 1965 with encapsulated cast iron keel.
Length 30ft draught 3ft 6 weight approx.4500kg
Five berths below deck in two separate cabins but ideal for three for extended cruising.
Sail wardrobe consists of the main on a stackpack system and a furling genoa. Spinnaker and boom.

Extensive reburbishment was carried out in 2006 which included replacement of all standing and running rigging.
The hull was Copperbotted and a substantial stainless steel shoe was fitted to the base of the keel to enable drying out.
A new Betamarine twin cylinder 14hp inboard diesel engine was fitted.
All electronics were upgraded which included the following:-

The owner at the time set the yacht up for serious single-handed sailing with long sea passages in mind and the yacht was circumnavigated around Ireland.

An Origo 2000 meths cooker has since been fitted and any gas installations removed.

The yacht was given an insurance survey in September 2014.

This is a classic little ship that will look after you in a storm and the fact many of them have been circumnavigated around the World successfully and consistently won their class in successive Fastnet races is testimony to their build and longevity.

Boats for sale
by continent

Boats for sale
by country